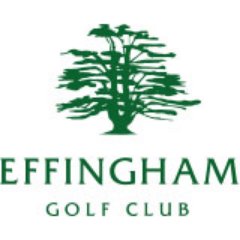 This day was originally scheduled to take place in August last year but for Covid reasons was postponed a year. With a bit of arm twisting Effingham Golf Club (EGC) had agreed to charge the same attendee rate as last year much to the relief of Peter Norris.

On a beautiful, warm day a good turnout of 28 players, including a guest,  attended the golf day at EGC for what turned out to be a most enjoyable and pleasant day. It was particularly pleasing to see four ladies attending. Yours truly gave a short presentation on the history of the golf club including its links to Lord Howard of Effingham and the Oak Royal while bacon baguettes and coffee were served . The highlight of this talk was the amusement caused by Peter Breakell failing to understand that a bordel was a house of ill refute where gentlemen took their nieces for the weekend. Not every golf club can claim that heritage!

The course was in excellent condition and played well. It was advisable, however, to keep well away from the long grass. My advice, based on personal experience, to those whose ball landed in the rough was to stop wasting their time after 30 seconds if it hadn’t already been found. During the course of the afternoon numerous balls were lost including three of mine but this didn’t appear to detract from the afternoon’s golfing experience.

And now the most important bit, namely the results.

Bill Quain played exceptionally well to score 40 points just pipping Peter Norris with 39 points.  Six players managed to score a highly commendable 34 points with Dave Tulloch taking third place on count back. Congratulations to all the winners.  There were also winners of nearest the pin and nearest the pin in 2 but, to be honest, I can’t remember who they were though I have a sneaking feeling one was Terry Wall. He usually wins something! No doubt the actual winners will let me now so that I can post an addendum to my report. My apologies in the meantime.

There was only one 2 and that was Bill Quain. He won £7 enabling £20 to be donated to the Chairman’s charity. Yes I know £20 and £7 doesn’t add up to £28 but one member overlooked to pay as he had to leave early.

The two course meal in the evening received much praise for its quality from many members both on the evening and in subsequent emails to me. A carvery always goes down well!

Previously we have left a tip of £1 per head for the catering staff but I suggested this should be increased to £2, and it was most gratifying to see that most members were happy to do so. I’m indebted to David Robertson for recommending an increase prior to the event. I would hope £2 now becomes the norm at future golf days. That seems like a good note on which to finish this report.