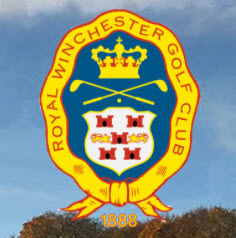 You must all be well aware that a major meeting has been held this week with a partially successful result. No, not CoP26, it was far more significant than that: CvP22!

The 22nd annual holding of this eagerly-awaited match between the ex-Captains of the BGS and the President’s team of loyal committee members, organisers and probable future captains, aka members, took place on 3rd November at its traditional Royal Winchester venue.

The course was looking in very presentable condition in the early November sunshine and a substantial full breakfast was enjoyed by all before the first group set off at 11. The usual format is in fourballs, with a pair from each team playing betterball Stableford. The attractive trophy is claimed by the team captain with the higher total point score.

This year, with 21 players, the first three matches went out as threeballs, with the single players off full handicap and the pairs off 85%. The new handicap system requires excessive amounts of arithmetic and chart-checking but all was accomplished just in time for the President to arrive only four minutes 59 seconds late on the tee thus avoiding a penalty!

The sunshine for the front nine was the obscured by the threatened clouds, making the sharp northerly wind feel even cooler, but the rain held off long enough for almost all the matches to conclude. An enjoyable gathering was followed by the Club’s welcome carvery with the roast lamb and beef pie each earning praise. The expected dessert failed to show as it had been booked separately and the message failed to get through to the kitchen – apologies from management have been received but, as was mentioned at the time “I don’t think anyone will go home hungry today”.

The last of the supply of unique memento balls were handed out to the deserving individual players, embossed with both the Club’s and the BGS names. Winners were NTP Mike Brown, LD Steve Anderson, and NTP2 Simon Davey. The final three went to the three players who had managed the considerable feat of a four-point hole: Martin Smith, Martyn Glastonbury, and Terry Wall.

And then, the countdown. As the results came in the President’s team built a very commanding lead. Terry having pipped Phil and Mike by 38-34, by the time the two singles from the Captain’s team had declared the lead had stretched to an astonishing 29, Mike and Chris having the best score of the day with 40, Simon and Steve running them close with another 38. Dave and Tony had been selected as players who could handle the demands of playing as singles against pairs but they were clearly not at their best.

The three remaining fourballs had steady scores and very close matches, Malcolm and Peter being the sole winners for Phil’s team against John and Libby but only by one (31-30), John and Martyn 36-34 up against Mike and Paul, with Anil and vice-captain Steve 33-31 to beat Gordon and Martin. Next year Steve will be trying to reverse this big defeat as Captain! 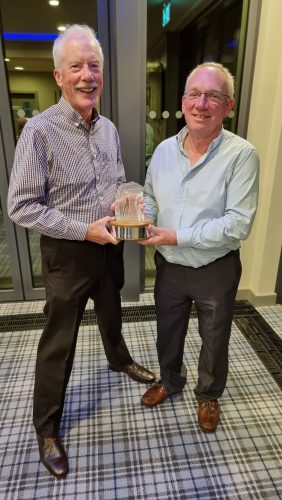