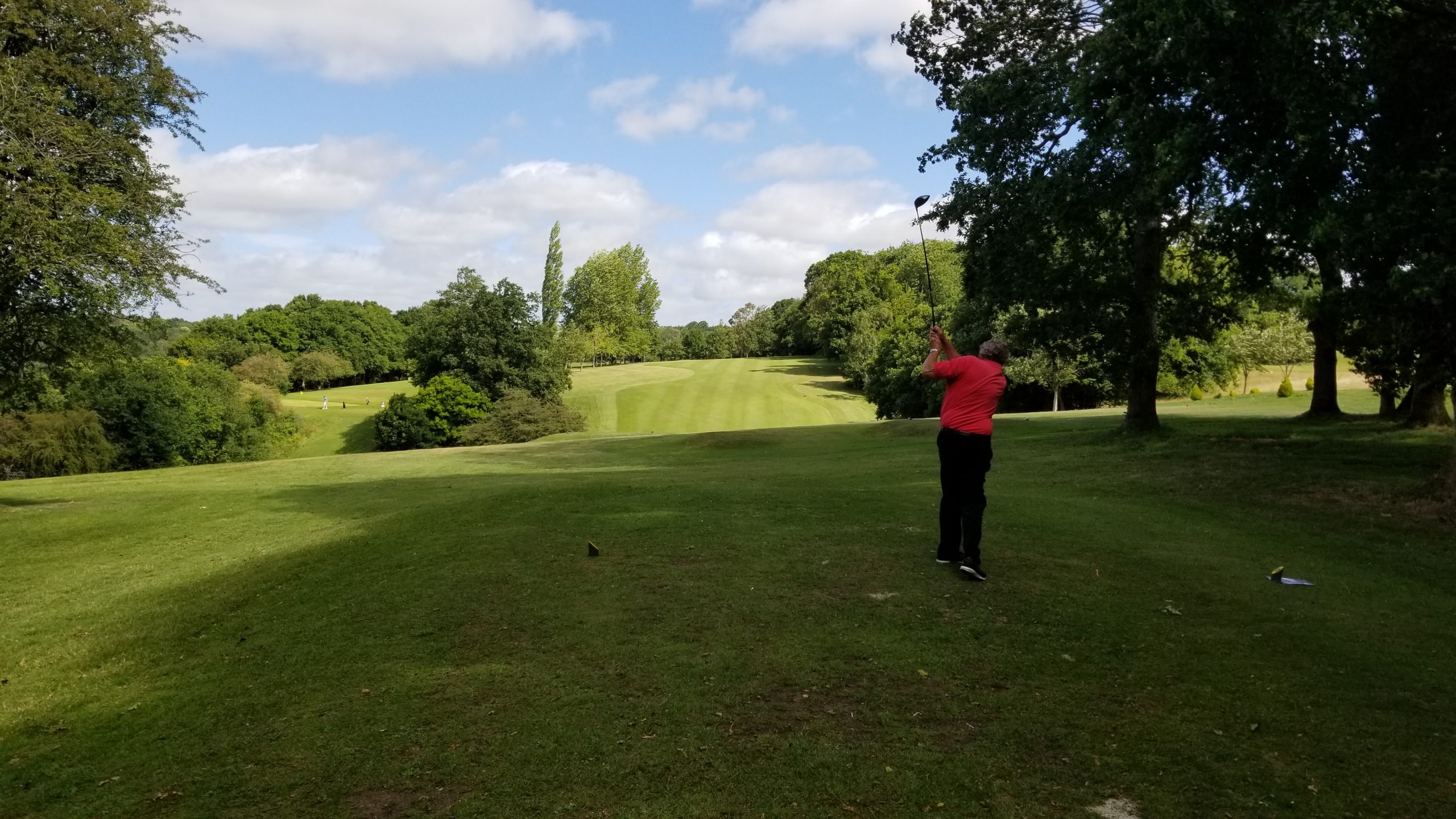 Suitably distancing the match was close and exiting the lead swapping 4 times at the halfway point the match was level. A sandy net par out of the back bunker by TR on 10 was matched by DM. PS made the extra shot count on 11 despite missing a 4 footer… 🙂 The short par 3 that followed led to incident number 1 … PS picking up despite having a put for a half oops. All level again.

The next hole, a difficult par 4 proved too much for the higher handicapped players so they went 1 down. The next incident came on the 14th down to TR teeing of the whites put the ball in position A… tough 2 shot penalty and re-tee from yellows … hole halved after some a great second shot from SA. Yet another incident on the 15th. TR drove into the woods (not a good idea tinkering with your swing in a match…) took 2 to get out then put the ball on the green. Everyone forgot about the fact that TR was lying 4 and almost conceded a half after he appeared to hole for 4, fortunately, we remembered in time and DM took the hole.

Onward they went all Square, to the 16th. PS took himself out of the hole by losing his ball in the long grass, having to escape from the dell. DM on the green in 3; TR and SA on in 2 – no shots. TRs put was long, SA short… DM holed his 16 footer from the edge of the green for 5. SA missed his put right, TR’s ball did a U-turn and came out of the hole…   still all square. The 17th saw both TR and SA par the hole PS and DM scored 5 no shots.  So PS and DM went to the final hole 1 down.

PS had a shot on 18 (SI 5). Good drives all-round, PS went for it! But … found the copse on the LHS of the green for a net1. DM long through the green in 4, TR, and SA chipping from less than 50 yards lying 2. Both chips came up short. PS somehow thumped the ball 30 yards through the trees, up to 3 feet from the hole  … Missed the par put, but 5 net 4 was good enough…  onward to the 19th hole short par 4. Great drives from PS and TR the latter finding a greenside bunker, DM hit a magic shot from 140 yards to find the back of the green. TR bunker shot to 10 feet, PS overran the put, DM put his dead so 4 in. 2 puts from TR still all square…

On to the 20th Hole DM picked up after his second shot hit the top of a grass bunker and disappeared into the woods. Good Drives from the others. TR 2nd shot left of the green, PS’s shot rolled around in front of a greenside bunker miraculously avoiding it, leaving him 5 yards from the green. Slightly mishit 8 iron from SA saw him come up short. SA long with next chip put short, then long. PS put short, TR’s recovery chip wnt over the bunker to 12 feet, but he missed the return put high. PS laid up to the hole for a 5 net 4 to win the match. Putters clicked in appreciation of a great game. Congrats to PS and DM a great match.

Great to get out there and play BGS golf, wasn’t what it was but nevertheless good to see some IBMers looking forward to our first full event